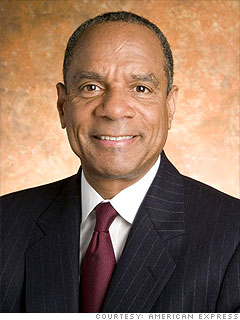 Ken Chenault, the outgoing CEO of American Express, is joining Facebook’s board of directors.

The technology industry has come under fire in recent year because of their lack diversity. Mr. Chenault joining Facebook’s board is one small step in the right direction.

“I've been trying to recruit Ken for years. He has unique expertise in areas I believe Facebook needs to learn and improve -- customer service, direct commerce, and building a trusted brand. Ken also has a strong sense of social mission and the perspective that comes from running an important public company for decades,” said Facebook CEO Mark Zuckerberg.

Mr. Chenault announced he would step down as Chairman and Chief Executive Officer of American Express at the end of January 2018.

Mr. Chenault is Facebook’s first non-white board member and first new board member since WhatsApp founder Jan Koum joined in 2014 after Facebook bought his messaging company.

Facebook’s Chief Operating Officer Sheryl Sandberg, told members of the Congressional Black Caucus that the social media company was committed to adding an African American to its board of directors during a closed-door meeting last year.

“Adding someone to our board is one of the most important decisions our board makes. It's a long process that I take very seriously since this is the group that ultimately governs Facebook. Ken and I have had dinners discussing our mission and strategy for years, and he has already helped me think through some of the bigger issues I'm hoping we take on this year,” said Mr. Zuckerberg.

Mr. Chenault spent 37 years at American Express and serves on the boards of IBM, The Procter & Gamble Company, the Harvard Corporation and the Arthur Ashe Institute for Urban Health.