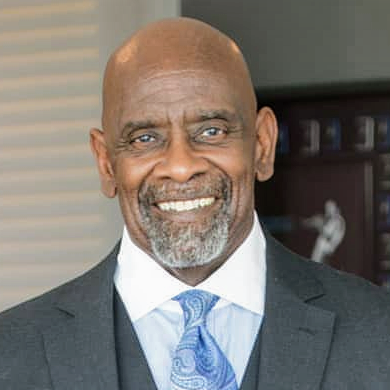 Chris Gardner is the founder and CEO of Christopher Gardner International Holdings.

The amazing story of Gardner's life was published as an autobiography, The Pursuit of Happyness, on May 23, 2006, and is the inspiration for the movie of the same title starring Will Smith as Gardner.

A series of circumstances in the early 1980's left Gardner homeless in San Francisco and the sole guardian of his toddler son. Unwilling to give up Chris Jr. or his dream of financial independence, Gardner started at the bottom. Without connections or a college degree, he earned a spot in the Dean Witter Reynolds training program. Often spending his nights in a church shelter or the bathroom at a Bay Area Rapid Transit station in Oakland, Gardner was the sole trainee offered a job at Dean Witter Reynolds in 1981. He spent 1983-1987 at Bear Stearns & Co., where he became a top earner, and then in 1987, he founded the brokerage firm Gardner Rich & Co in Chicago.

Born February 9, 1954 in Milwaukee, Wisconsin, Gardner never knew his father. He lived with his mother, Bettye Jean Gardner, whom he adored, and, when necessary, in foster homes. Despite a life of hardship and emotional scarring, his mother provided him with strong "spiritual genetics" and taught him some of the greatest lessons of his life, which he follows to this day. Bettye Jean convinced him that in spite of where he came from, he could attain whatever goals he set for himself by saying, "If you want to, one day you could make a million dollars." Gardner believed this to be fact, and knew he would have to find a career he could be passionate about, and one that would allow him to "be world-class at something."

Straight out of high school, Gardner enlisted in the Navy, just like his uncles, his role models, had done. After the military, Gardner went to San Francisco and took a job as a medical supply salesman. Then he reached a turning point in his life. In a parking lot, he met a man driving a red Ferrari. "He was looking for a parking space. I said, 'You can have mine, but I gotta ask you two questions.' The two questions were: What do you do? And how do you do that? Turns out this guy was a stockbroker and he was making $80,000 a month."

That pivotal encounter gave Gardner a clear career goal and he began knocking on doors, applying for training programs at brokerages even though it meant he would have to live on next to nothing while he learned. When he was finally accepted into a program, he left his job in medical sales. But his plans collapsed when the man who offered him the training slot was fired, and Gardner had no job to go back to. Then he was put in jail for $1,200 in parking violations he couldn't pay. Chris Jr.'s mother left and Gardner, despite his circumstances, fought to keep his son because, as he says, "I made up my mind as a young kid that when I had children they were going to know who their father is, and that he isn't going anywhere."

Finally managing to enter the training program at Dean Witter Reynolds, Gardner's meager stipend as a trainee meant he, like so many working poor in America, had a job but couldn't make ends meet. Chris's co-workers never knew he spent his evenings trying to arrange day care, find food and a safe place for him and his son to sleep. After spending nights in a locked bathroom at an Oakland subway station, Gardner persuaded Rev. Cecil Williams, founder of a new shelter program for homeless women at Glide Memorial United Methodist Church, to let him and Chris Jr. stay at the shelter.

Gardner passed his licensing exam in 1981 on the first try. He arrived early, stayed late and worked the phones day after day to lure new clients. He and Chris Jr. got an apartment, and in 1983 he joined Bear, Stearns & Company. After becoming a top producer, first in San Francisco and later in New York, Gardner left in 1987 to establish Gardner Rich & Company, Inc., an institutional brokerage firm specializing in the execution of debt, equity and derivative products transactions for some of the nations largest institutions, public pension plans and unions. The company has expanded into Christopher Gardner International Holdings and now has a business project underway in South Africa.

Gardner reaches out to many programs serving the homeless, donating time, assistance, and funds. Foremost among these are the Glide United Methodist Church in San Francisco and The Cara Program in Chicago. At Glide, Gardner assists with fundraising, donates clothes and shoes, and speaks at services and events. He is also involved in a plan to revitalize and provide new housing in the neighborhood around Glide. At Cara, which assists the homeless and at-risk populations in Chicago with comprehensive job training and placement, Gardner speaks at counseling sessions, assists with permanent job placement, and also donates clothing and shoes.

Gardner serves as a board member of the National Fatherhood Initiative, whose mission is to improve the well-being of children by increasing the proportion of children growing up with involved, responsible, and committed fathers. Gardner was the recipient of the group's Father of the Year Award in 2002.

In addition to the father of the Year Award, Gardner has also been honored by the Los Angeles Commission on Assaults Against Women (LACAAW) with the 25th Annual Humanitarian Award, and by the Continental Africa Chamber of Commerce with the 2006 Friends of Africa Award.

Chris Gardner's remarkable story of struggle, faith, entrepreneurialism, and fatherly devotion has catapulted him beyond the notoriety he has found on Wall Street. He has been featured on the "Evening News with Dan Rather," "20/20," "Oprah," "The View," CNN, CNBC as well as being the subject of profiles in numerous newspapers and magazines including USA Today, Associated Press, New York Times, Fortune, Reader's Digest, Chicago Tribune, San Francisco Chronicle, and the Milwaukee Journal Sentinel. He is also a highly sought after speaker.