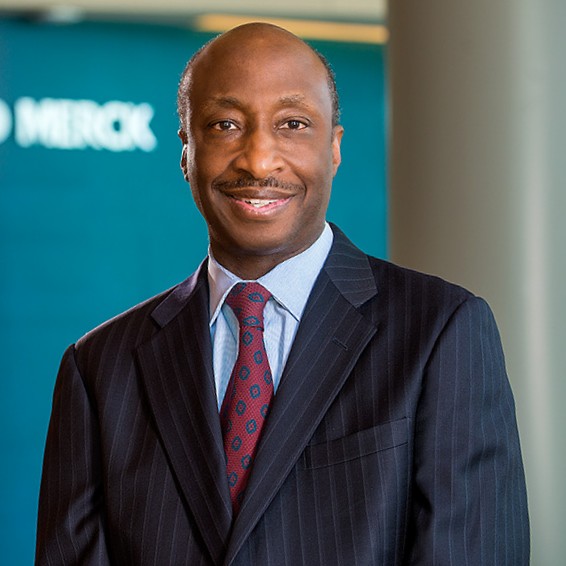 Kenneth C. Frazier is the Executive Chairman of Merck’s board of directors, a role he began in July 2021, following his retirement from a decade-long tenure as Merck’s President and Chief Executive Officer.

Mr. Frazier became Merck’s chief executive officer and a member of its board in January 2011. He became chairman of the board on December 1, 2011.

Prior to joining Merck & Co., Mr.Frazier was a Partner in the Litigation Department of Drinker Biddle & Reath, 1978-1992.

Mr. Frazier is Chairman, Health Assurance Initiatives, at the venture capital firm, General Catalyst, where he advises on investments and partnerships and provides mentorship to founders building companies that are well positioned to transform the healthcare industry through collaborative and responsible innovation.

As a strong advocate for social justice and economic inclusion, Mr. Frazier Is the recipient of numerous awards and honors, including:

Mr. Frazier’s contributions, especially in the legal, business, and humanitarian fields, have been widely recognized.

He is Co-Founder and Co-Chair of OneTen, a coalition of leading organizations committed to upskilling, hiring, and promoting one million Black Americans into family-sustaining jobs.  OneTen is committed to facilitating a meaningful, measurable, and lasting impact on racial and economic justice.

He also is a member of the American Academy of Arts and Sciences, the American Philosophical Society, The Business Council, the Council of the American Law Institute, the American Bar Association, and a Fellow of the College of Physicians of Philadelphia.  Additionally, Mr. Frazier is Co-Chair of the Legal Services Corporation’s Leaders Council.