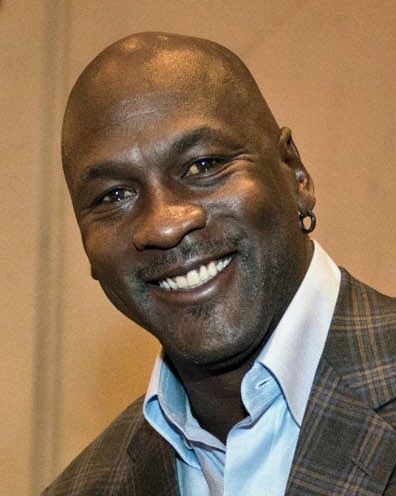 Since its creation, his Jordan Brand (an elite division of Nike) has been an innovator of athletic shoes and apparel. Brand Jordan has grown to become a market leader with Mr. Jordan’s creative design input. Generating over $4.7 billion (2021/6/24) in annual sales for Nike. The company is reported to now generate more than $100 million in annual royalties for Mr. Jordan.

As one of the world’s most popular and recognizable figures, Mr. Jordan’s endorsement portfolio includes Gatorade, Upper Deck, Hanes, Nike, Coca-Cola, Chevrolet, McDonald's, Ball Park Franks, Rayovac, Wheaties and MCI. Mr. Jordan has had a long relationship with Gatorade, appearing in over 20 commercials for the company since 1991.

In 2004, Mr. Jordan formed Michael Jordan Motorsports as a result of his passion for motorcycle racing. He also became a NASCAR team co-owner in late 2020.

Mr. Jordan also co-owns an automotive group which bears his name. The company has a Nissan dealership in Durham, North Carolina, acquired in 1990, and formerly had a Lincoln–Mercury dealership from 1995 until its closure in June 2009. The company also owned a Nissan franchise in Glen Burnie, Maryland.

Mr. Jordan has also owned several restaurants including a steakhouse in New York City's Grand Central Terminal, among others; that restaurant closed in 2018. Mr. Jordan is the majority investor in the golf course, Grove XXIII, in Hobe Sound, Florida.

Mr. Jordan is regarded by most as the NBA's greatest all-time player, he won six titles while playing with the Chicago Bulls.

Mr. Jordan is an investor and serves as a Special Advisor to the Board of Directors for DraftKings.

Mr. Jordan is a 6 time NBA champion, 6 time NMA Finals MVP and 5 time NBA MVP. In 2016, Mr.  Jordan was presented with the Presidential Medal of Freedom by President Barack Obama. In April 2009, he was inducted into the Naismith Memorial Basketball Hall of Fame.

On June 5, 2020, in the wake of the protests following the murder of George Floyd, Jordan and his brand announced in a joint statement that they would be donating $100 million over the next 10 years to organizations dedicated to "ensuring racial equality, social justice and greater access to education. Mr. Jordan has supported many charitable causes including the James R. Jordan Boys and Girls Club in Chicago, the Jordan Institute for Families at the University of North Carolina, the Make-A-Wish Foundation and many others through the M & J Endowment Fund. His annual Michael Jordan Celebrity Invitational golf tournament (2001 to 2014), has raised more than $2 million for several worthy charities since its inception.