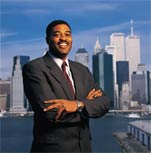 Ronald E. Blaylock is the founder and managing partner of GenNx360 Capital Partners, a private-equity buyout fund focused on industrial business-to-business companies, since 2006.

Prior to founding GenNx360 in 2006, He was Founder, Chairman and CEO of Blaylock & Company, a full service investment banking firm headquartered in New York City with offices in Chicago and Atlanta. The firm has consistently been ranked among the top 20 investment banking firms in the United States for underwriting corporate debt securities.

In 2005, Blaylock & Company was ranked the number one minority investment banking firm in the U.S. as reported by Securities Data Inc., distinguishing itself by underwriting over $150 billion of securities in that year. Notably, also in 2005, Blaylock & Company served as a lead manager on a $1.6 billion bond financing for General Electric, and, in its equity capital markets business, as a Co-Manager on Google's $4 billion secondary offering.

Over the past 10 years, Blaylock & Company has also consistently ranked as the number 1 or 2 minority investment banking firm by Black Enterprise Magazine. Since the firm's inception in 1993, Mr. Blaylock has received numerous industry awards and has served as a frequent guest on CNBC's Squawk Box and Closing Bell and Bloomberg TV's Morning Call.

Mr. Blaylock serves on the boards of numerous corporate and non-profit organizations including CarMax, Pfizer, W.R. Berkley, Inc., Carnegie Hall and the New York University Board of Trustees. He previously served as a Director of Radio One, Inc. and W.R. Berkley Insurance Companies. Previously, he served on the Board of the American Ballet Theatre. He also formerly served on the board of Georgetown University.

In 1999, Blaylock was voted Capital Raiser of the Year by Corporate Finance Magazine. More recently, in 2005 he was named one of the Most Powerful Blacks on Wall Street by Black Enterprise Magazine and was also named Man of the Year, by the Covenant House for his charity work with that organization. He was a member of Georgetown's 1982 Final Four Basketball Team.

Mr. Blaylock earned a Bachelor of Science degree in Finance from Georgetown University and holds and Master of Business Administration degree from New York University's Stern School of Business in Finance.

Please Support Our SponsorsBecome a sponsor.

You’re reading BlackEntrepreneurProfile.com -- experts who research black executives, entrepreneurs and their surrounding ecosystem, on a weekly basis. Be sure to check out our homepage for all the latest profiles and news, and follow Black Entrepreneur Profile on Twitter, Facebook, and Instagram to stay updated. Start by checking out some of our exclusive collections, Black Billionaires and Black Fortune 500 CEOs.

Rihanna's lingerie company Savage X Fenty, known for its inclusivity of all body types, is reportedly planning a public offering at a reported $3…

Sean Combs has saved his company, Sean John, from bankruptcy

Mr. Combs, 52, won back ownership with a $7.55 million bid in an auction to save Sean John from bankruptcy, according to court documents. Mr. Comb's…