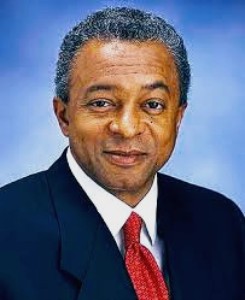 Earnest Stanley O'Neal currently serves on the board of Alcoa Inc. and is the former Chairman and Chief Executive Officer of Merrill Lynch, the worldâ€™s largest brokerage firm, with offices in 38 countries and territories and total client assets of almost $2.0 trillion. Mr. Oâ€™Neal became Merrill's chief executive in 2002 and was elected chairman of Merrill Lynch in 2003, serving in both positions until October 2007.

Mr. Oâ€™Neal worked for Merrill Lynch for 21 years. He was named president and chief operating officer in July 2001 and served as president of Merrill Lynch's U.S. Private Client group from February 2000 until July 2001.  He served as executive vice president and chief financial officer of Merrill Lynch from 1998 until 2000 and also held the position of executive vice president and co-head of the Corporate and Institutional Client Group (now Global Markets & Investment Banking) prior to that.  Previously, Mr. O'Neal had been in charge of Capital Markets and a managing director in investment banking, heading the financing services group, which included the high yield finance, restructuring, real estate, project and lease finance, and equity private placement groups.

Before joining Merrill Lynch, Mr. O'Neal was employed at General Motors Corporation in New York and Madrid.  He held a number of financial positions at the company, including general assistant treasurer in New York, responsible for mergers, acquisitions and domestic financing activities.

On 25th of October 2007, Merrill Lynch reported losses of 8.4 billion USD. This was due to the credit crises from the sub-prime mortgage market happed earlier in the year. Under corporate pressure, he resigned from his position at Merrill Lynch on October 30, 2007, leaving with about $160,000,000 (about $90 million in stock, $40 million in options and another $30 million in pension and other benefits).

In a story by William Cohan in Fortune Magazine, Mr. Oâ€™Neal told his side of the story for the first time since he resigned in October 2007.

Twice in 2007 Oâ€™Neal tried to negotiate deals to sell Merrill at premium prices, only to encounter crushing opposition from an unlikely source: Alberto Cribiore (pronounced Crihbe-OR-ee), a friend whom Oâ€™Neal had appointed to Merrillâ€™s board four years earlier. Given his extensive Wall Street experience, Cribiore, a former partner at private equity firm Clayton Dubilier & Rice, wielded outsize power. He argued vociferously that Oâ€™Neal was too negative and that Merrill could address its CDO problem without having to sell the firm at a moment of weakness.

This pitched battle between the CEO and the board member, largely unexplored until now, shows how a single person was able to thwart what may have been Merrillâ€™s salvation. And it suggests that Oâ€™Nealâ€™s failure consisted as much of his inability to persuade his board to take necessary action as it did in his earlier cluelessness about the risks posed by the mountains of CDOs, those bundles of debt securities, many of them tied to subprime mortgages.

Whatever you think, one conclusion is inescapable: This conflict cost Merrill shareholders dearly. In the aborted 2007 negotiation, Oâ€™Neal seemed close to a deal with Bank of America to sell for about $100 billion. When Merrill was finally unloaded a year later to the same buyer, it went for half that amount. In all, the failure to sell in 2007 would cost Merrill shareholders some $50 billion.

Mr. O'Neal received a master's of business administration with distinction in Finance from Harvard University and is a graduate of Kettering University (formerly General Motors Institute). He served on General Motorâ€™s Board of Directors from 2001-2006.