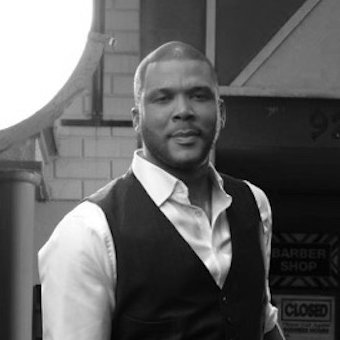 Tyler Perry is the president and founder of The Tyler Perry Company Inc., (Tyler Perry Studios). He is best known as a writer, director and actor in films, television and theatre. In 2010, the New Yorker described Perry (subscription required) as "the most financially successful black person the American film industry has ever known." In a September 1, 2020 article, Forbes.com declared him a billionaire with a net worth of $1 billion. "Forbes estimates Perry has earned more than $1.4 billion in pretax income since 2005."

Mr. Perry was born Emmitt R. Perry, Jr. in New Orleans, one of four children. Perry changed his first name to Tyler because of his troubled relationship with his father.

Mr. Perry who once lived in his car has become the most successful black producer of film and theatre in the U.S.

Mr. Perry's rags-to-riches tale is astonishing and inspirational.  His younger days were troubled, and he suffered from endless abuse growing up.  The dejection and rejection caused Perry to do some soul-searching as an adult.

In 1992, in an effort to find catharsis for his own childhood pain, and inspired by Oprah Winfrey to put it down on paper, he wrote a series of letters to himself.  Those letters would be transformed into his first hit musical, "I Know I've Been Changed." Mr. Perry's humble spirit and his faith in God kept him focused.  He believed that God was calling him to share his story with as many people as possible so that he might help others. Mr. Perry learned real forgiveness, deep down inside--a forgiveness that leads to success in the soul.  He chose the stage life as a vehicle, and this new life has been a learning process, full of hard work.  But now Mr. Perry has reached out to millions across the country and in doing so has tremendously altered how people perceive and attend urban theatre.

In 2005, he took the nation by storm when the movie he wrote, produced, and starred in, "Diary of a Mad Black Woman", opened #1 at the box office.  In its first week on sale, the DVD sold nearly 2.5 million copies.  At the same time, Mr. Perry was starring nightly across the country in a sold-out stage show he'd also written, produced and scored--"Madea Goes to Jail"--even as another one of his productions, "Meet the Browns," was touring nationally.  Together, the two productions sold out more than 500 shows in theatres from coast to coast. Every week in 2005, 35,000 people saw a Tyler Perry production.

Since making his film debut with "Diary of a Mad Black Woman", Mr. Perry has become a multimedia phenomenon with a roster of hugely successful film, stage, television, and book projects.

Mr.Perry's first two films both debuted at number one at the North American box office and the combined sales of his nine DVDs have sold over 11 million units.

Mr. Perry's first book, "Don't Make a Black Woman Take Off Her Earrings: Madea's Uninhibited Commentaries on Life and Love" debuted at #1 on the New York Times' hardcover nonfiction bestseller list and remained in the Top 10 for eight weeks.

TBS is currently (10/2012) airing three popular Perry shows, House of Payne, Meet the Browns, and For Better or Worse.

It was announced on October 1, 2012, that Mr. Perry signed an exclusive partnership with his friend Oprah Winfrey`s OWN: Oprah Winfrey Network, to become his singular destination for all new television series and projects, including two new scripted series for the network to premiere in mid 2013. These will be the first original scripted series for OWN, and Mr. Perry will executive produce, write and direct both series.