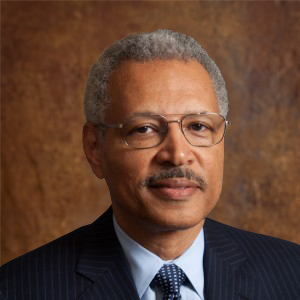 He is the former Chairman and CEO of Aetna Inc., a leading diversified health care benefits company, which had revenue of approximately $27.6 billion in 2007. Under his leadership, Aetna has sought to make a positive impact on health care in America by serving as a catalyst for change, focusing the industry, public policy leaders, physicians and employers on issues aimed at increasing access and affordability.

Mr. Williams served on the President's Management Advisory Board, which was assembled by President Obama to help bring the best of business practices to the management and operation of the federal government. He was appointed to the board in March 2011.

Joining Aetna in 2001, Mr. Williams has focused on creating innovation in the industry, especially through information technology, and bringing new levels of transparency to the health care system. In September 2001, Aetna became the first national insurer to offer a consumer-directed health plan. In August 2005, Aetna's launch of a new online consumer tool to view physician-specific price information was widely recognized as the beginning of a new era of transparency in the health care marketplace. More recently, Aetna led the effort to develop industry standards for electronic personal health records, which provide a new way for consumers to be more engaged in their health care.

In 2002, Mr. Williams was named President and joined Aetna's Board. He was named CEO in February 2006 and Chairman of the Board in October 2006. Throughout his Aetna career, Mr. Williams has been outspoken in making the business case for quality in health care. He guided efforts to create Aetna's Aexcel network to provide access to cost-effective, quality care in high-cost specialties.

Mr. Williams also is a strong proponent of meaningful health care reform. He was an early advocate in calling for an individual coverage requirement to expand access to health care and provide assistance to those who truly cannot afford it. He has championed specific reforms in op-ed articles he authored or co-authored in The Wall Street Journal, Washington Post, The Financial Times and the Seattle Post-Intelligencer.

Mr. Williams serves on the Board of Directors of American Express Company, The Boeing Company and Johnson & Johnson.  He is also an advisor to the private equity firm, Clayton, Dubilier & Rice, LLC, and served as Chairman of the board of Emergency Medical Services Corporation, a leading provider of facility-based physician services and medical transportation services in the U.S.  He also served on the boards of the Peterson Institute for International Economics and Save the Children.

Mr. Williams is a graduate of Roosevelt University and holds an M.S. in Management from the Sloan School of Management at the Massachusetts Institute of Technology.